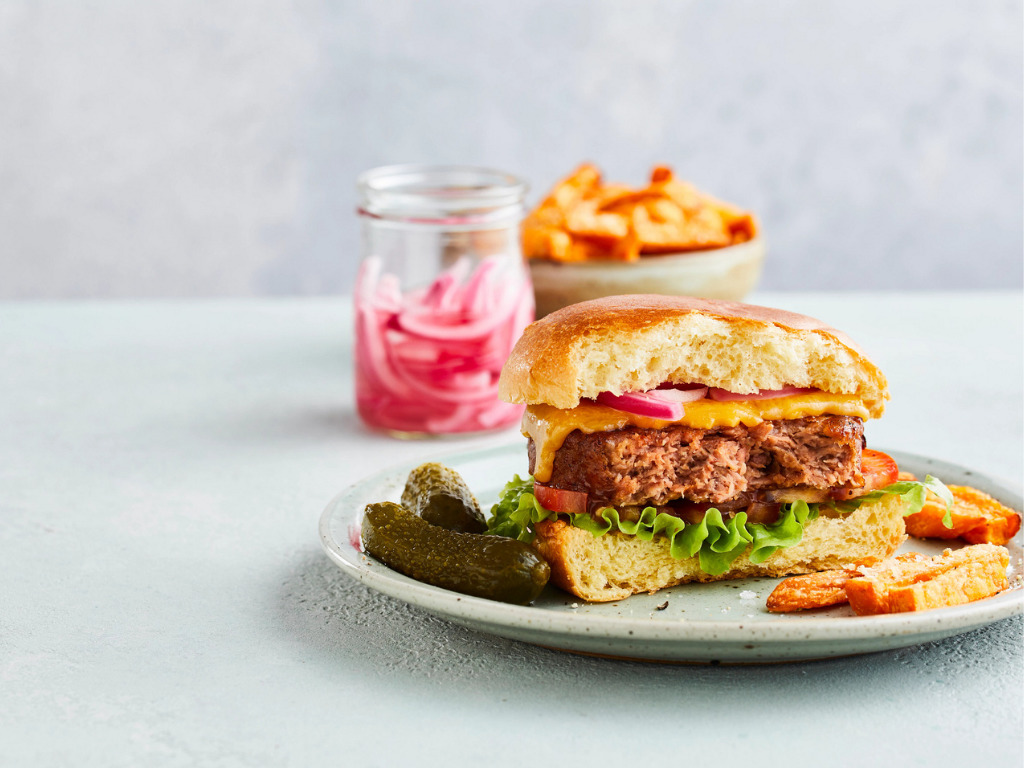 Consumers across the globe are adopting flexitarian diets, motivated by health and environmental factors. Newly published research by Kerry, the global leader in taste and nutrition, suggests the move towards alternative proteins starts with easy substitutions of existing favourite foods such as burgers. But what exactly do consumers look for when choosing a plant-based patty? Preliminary findings of Australian consumers suggest that taste and texture remain a barrier when it comes to plant-based meat, and a ‘beef but better’ mindset is front and centre.

The study was based on 1,500 consumers between the ages of 25 and 40 years testing 16 plant-based burgers from 14 different manufacturers, including a mix of global and regional brands. The idea was to look at consumer sensory perception, what consumers like, what works, what doesn’t and where are the areas of opportunity.

In Australia, consumers made it clear that they are looking for ‘beef but better’, with conventional animal beef an important benchmark, but one consumers say can be bettered. “In other words, consumers want a plant-based burger that tastes like beef, and they want it to be better for the environment as well as better for their health,” said Jie Ying Lee, Senior Strategic Marketing Manager for Plant-Based at Kerry Asia Pacific, Middle East & Africa.

But what makes a plant-based burger taste like beef? Too much salt is a no-no, as are overpowering and artificial flavours. The key for brands is to achieve a delicate flavour balance, and consumers also cited the importance of the right lingering aftertaste. Another key takeaway? The importance of the first bite.

Further, a pleasing taste will not overshadow poor mouthfeel, especially if it is very different from conventional meat.

On the texture side, the study identified what they call ‘variation in bite’, whereby a burger has a firm outer part (as a result of charring) and a soft inner texture.

Cooking behavior a key part of the plant-based meat puzzle

When it comes to cooking, sizzle matters. In fact, they expect sizzling as soon as they place the patty on a hot pan, just like with a beef burger. Good sizzle creates positive expectations of taste and succulence. Further, consumers say that beef-life cues like meat browning and caramelising help them control the cooking process and signal when the patty is ready and safe to eat. Interestingly, consumers don’t want the plant-based burger to mimic a beef one too much — visible fat globules and pink juices were considered by the tasters as ‘going too far’, added Lee.

While product pricing was not part of the study, according to Lee previous research by Kerry underscored that high relative prices of alternative protein meat is a major barrier for consumer adoption, and repeated purchasing of such products would require them to be the same cost or cheaper than their animal counterparts.

Depending on the country, consumers may have a different beef burger benchmark. For example, for Australian consumers, the beef burger benchmark is a fresh burger grilled on a BBQ so there is more of an emphasis on chargrilled, whereas in the U.S. and Brazil, they may make their own burgers from scratch and season to their liking, so meatiness is a key factor.

Previous research by Kerry underlined that the appeal of plant protein in APAC has increased by 75% and is outperforming the global average. 62% of APAC consumers are interested in plant-based meat, while 44% plan to increase their consumption of meat alternatives and 32% are actively trying to cut meat consumption. 28% have already dramatically cut their meat consumption. The overall takeaway is that APAC consumers are open to the concept of new foods, including plant-based meats, if they offer health benefits and effective nutrition, and clean labels with recognisable ingredients.

As a nation, Australia is a large consumer of meat, with one of the highest per capita intakes in the world (89.6 kilograms per year as of 2019). While chicken is the dominant animal protein, beef accounts for about 20 kg of that total. Across the last decade, beef consumption has declined and is predicted to remain on a downward trajectory.

Today, 73% of Australian consumers are planning to cut meat intake and 55% plan to consume more plant-based food. Research shows that Australia is the third fastest-growing market in the world for plant-based foods, and its alternative meat sector is expected to reach A$3B by 2030. Kerry’s research highlights significant opportunities for plant-based meat manufacturers in the Australian market to offer healthier, more sustainable protein alternatives, provided they can rise to the formulation challenge: a combination of balanced flavour, good nutrition, comparable mouthfeel and identifiable cooking cues.