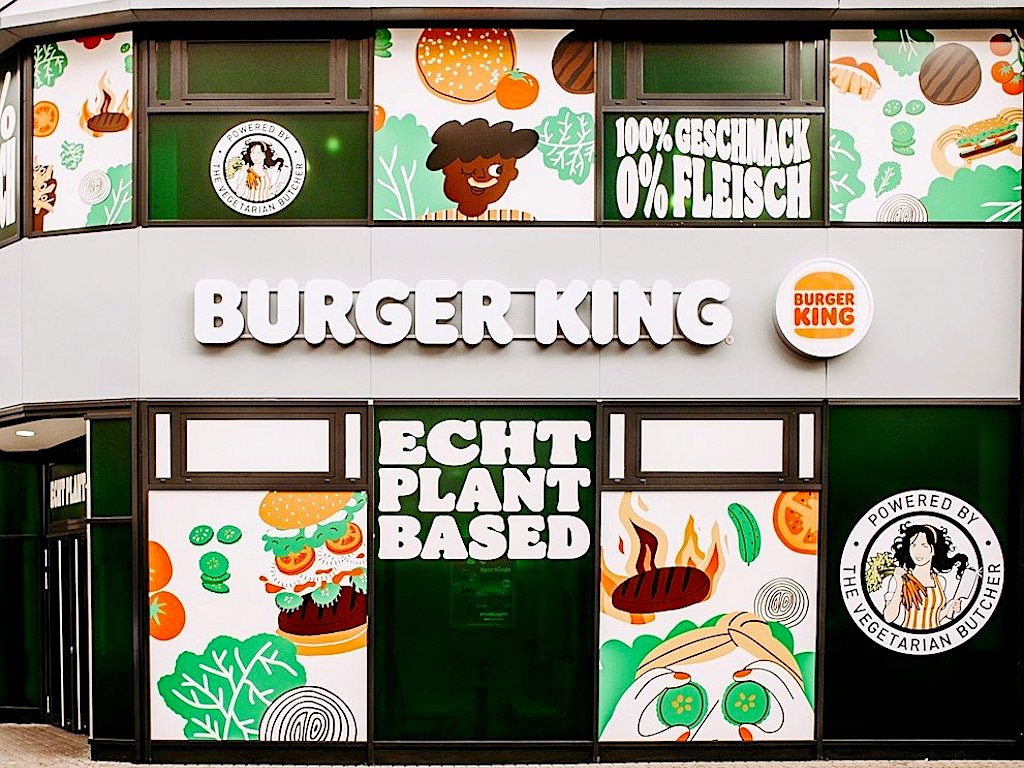 The world’s first-ever meat-free Burger King outlet has opened doors in Cologne, Germany this week, amid surging mainstream demand for plant-based food as consumers adopt flexitarian eating habits for environmental, ethical and health reasons. The restaurant, open from June 7 to June 11, has teamed up with The Vegetarian Butcher to serve meatless Whoppers, vegan nuggets and even Ben & Jerry’s dairy-free ice creams.

Fast food giant Burger King has officially launched its first plant-based restaurant in Cologne this week, which will feature an entire menu without meat. Partnering with Unilever subsidiary The Vegetarian Butcher, the Cologne outlet is now serving hungry diners vegan versions of its signature items between June 7 and June 11.

Announcing the opening of the restaurant, The Vegetarian Butcher wrote on a social media post: “The news you’ve been waiting for: world’s first plant-based Burger King restaurant has now officially opened in Germany and it’s powered by The Vegetarian Butcher. Food Revolution at its finest – so you can enjoy all the iconic meals, without having to sacrifice a thing.”

The exclusive Burger King outlet will also be serving dairy-free vegan ice creams made by Ben & Jerry’s to round it off.

According to the Burger King Germany website, the new plant-based restaurant is not only aimed at providing more options for herbivores, but is targeted at the rising group of flexitarians and encouraging more meat-eaters to try out vegan options. It pledges to ensure that “everyone gets their money’s worth with our exclusive plant-based” menu.

It’s not the first time that Burger King has partnered with The Vegetarian Butcher, having dished out new plant-based options across the U.K., Indonesia, China, United Arab Emirates and across Europe with the brand.

However, it marks the first time that Burger King has taken it a step further to launch an entirely plant-based campaign and ditched meat from its menus – suggesting strong consumer demand and positive response to its latest moves to ramp up vegan and vegetarian offerings around the world.

Choosing to test the meatless restaurant concept in Germany is also indicative of the particularly strong demand for vegan food in the country. Sales of vegan meat alternatives have grown in Germany by an impressive 226% over the past two years to top €181 million (approx. US$218 million) in market value, according to a recent E.U. study.

Data collected during the pandemic also showed for the first time that German consumers who identify as full-time meat-eaters are now a minority in the country, a sharp turn away from the country’s pork-loving reputation.

Globally, as many as 4 in 10 consumers are now flexitarians, a trend primarily driven by the younger generation of conscious Gen Z and millennial shoppers whose influence will continue to grow over the next few years.

A similar meat-free concept has been trialled out by fellow QSR giant KFC before, whose branch in Rotterdam in the Netherlands went a whole week without meat back in March 2020. For seven days, the KFC outlet worked with legacy meat alternative brand Quorn to offer customers a chicken-free version of all its classic menu items.

Like Burger King, KFC has been betting big on the plant-based trend as well and most recently forged a long-term agreement with food tech giant Beyond Meat to begin co-developing a number of plant-based proteins over the next few years.

Beyond Meat has also landed a three-year deal with McDonald’s, the world’s biggest QSR chain, a strong signal that veganism has well and truly made it into the mainstream.